Jacqueline Alves Actor 6 is absolutely delighted to be making her SecondStory debut! She has had a deep love of theater her entire life. It's been years since she was on a stage, and she's never been more ready to perform! Her favorite role that she has played was "Audrey" in Little Shop of Horrors. When she is not on stage, you can find her cooking up a storm in the kitchen, or at 30, feet above ground working as a Flight Attendant for Alaska Airlines. She has been acting since she was nine years old and is excited to be pursuing it in college and as a career.

Many thanks to the production team, Aidan, Aaron Norman, and her family. Enjoy the show! Dedicated to education and inspiring students, Carly is thrilled to be a part of this Theater for Young Audiences show.

As I recalled that line, I braced. I had so many rigid expectations of myself that I often felt stuck.

Not too long before, I had taken a semester off during my second year of college to enter treatment for an eating disorder. At the time, I viewed this as a failure. Here I go again , I thought. At another point in the book, Milo lands in the Doldrums—winding paths that swirl around and lead to nowhere.

‘The Phantom Tollbooth’ and the Wonder of Words

That day, as I gripped tightly onto my favorite book from childhood, something shifted in me, too. Back then, my inner world had been full of color, in contrast to the bleak landscape in which I now felt trapped. 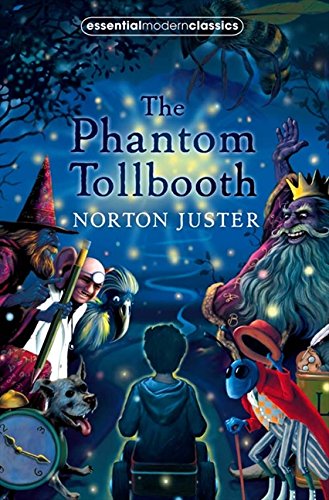 Maybe I had to follow the same kind of clues that Milo did to understand my own self-worth. Maybe I needed to look at myself from alternative points of view. If I lingered here in the place in my mind where failures were all I could see, my life would never change.

If I wanted to return Rhyme and Reason to my world, I would have to stop these constant interrogations of my self-worth. To reach new places and learn about who I was, I could not dwell forever in the land of Expectations or the Doldrums. I had to reframe my thoughts, create space for hope, and envision who I might still become. And I had to find some humor again. Gradually, I did. It took time and tears: The foothills of confusion were still all around me, and I needed to conquer my own mountains of ignorance.

But after that afternoon with the map of the Lands Beyond, I started to wake up from what had felt like a long dormancy. I allowed myself to re-engage in therapy and began to understand that reentering treatment was not a failure. Instead, it was a life-changing decision not to lose another second for my body by following such dangerous demands. Rather, it meant that I had succeeded in changing my mind about what my future could be.